On February 4 un artwork will be unveiled form Florentijn Hofman at on the north side of the facade of the Institute Brains Unlimited at Oxfordlaan 55.
The Department of Cognitive Neuroscience at the Faculty of Psychology and Neuroscience at Maastricht University, Scannexus and Biopartners had expressed the desire in 2015 to give the gray concrete facade of the building to the Oxfordlaan55 more vivid and inviting character.
In collaboration with the Art and Heritage Commission has been decided to ask an artist to create an artwork that introduces transparency into the wall in a way that one feels invited to enter the building and at the same time gives a vivid impression of what is going on in the building. The artwork should show audacity so Oxfordlaan55 will be a place that you can’t ignore. Florentijn Hofman, internationally known as the rubber duck artist who travels around the world, is asked to come up with a proposal for a work of art. He makes a design for a work of art in which he needs the cooperation of students and staff.
Massively and enthusiastically students and employees sign up for this art project. From all signups 24 of them are chosen to participate coming from all parts of the world.
For this art project Florentijn Hofman sought cooperation with the photographer Inge Hondebrink. Inge is internationally known for her photographs of participants of the Paralympic Games in Sydney and London.The work will be installed at the end of February 2016 and the opening will take place.on March the 4th at Oxfordlaan 55. 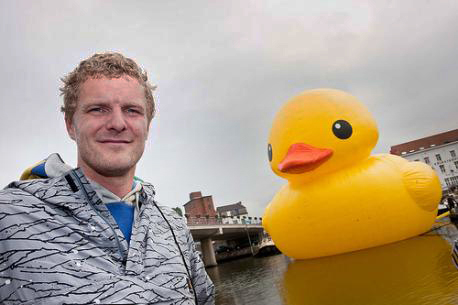